Get fresh music recommendations delivered to your inbox every Friday.
We've updated our Terms of Use. You can review the changes here.

Who Breaks a Butterfly upon a Wheel? A Tribute to Pussy Riot 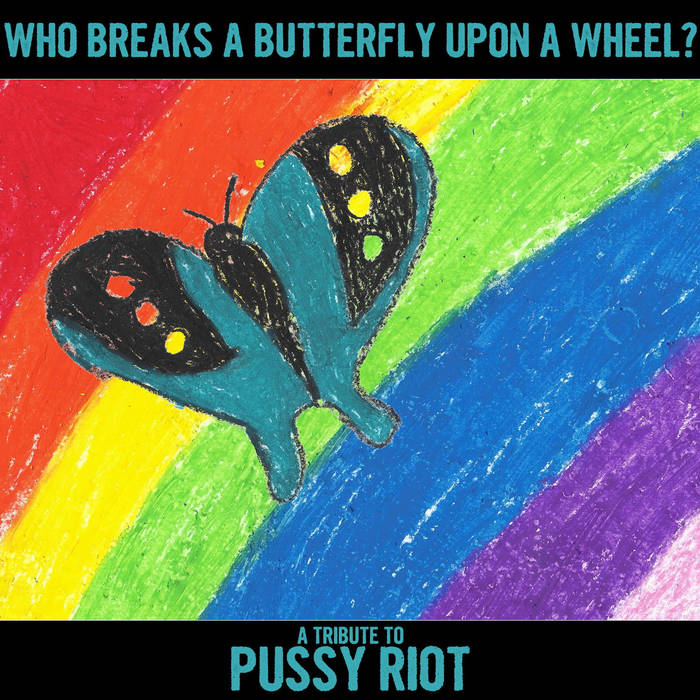 Update (February 21, 2014): When Nadezhda Tolokonnikova and Maria Alyokhina were released from prison they made it clear they would not go away quietly. shortly after their release they reiterated their opposition to the regime of Vladimir Putin. Then earlier this month, after traveling to Asia and Europe, they performed at an Amnesty International benefit concert in New York with a variety of notable celebrities. The trip also included a memorable appearance on the Colbert Report (www.colbertnation.com/the-colbert-report-videos/432806/february-04-2014/pussy-riot-pt--1?utm=share_twitter). Pussy Riot has also made their presence known at the Winter Olympics, now underway in the Russian city of Sochi. They were detained by the police, allegedly for stealing from their hotel. On February 19th Pussy Riot released a video called "Putin Will Teach you How to Love". The video shows members of Pussy Riot being harrassed by security forces at the Olympic Park in Sochi. (www.youtube.com/watch?v=gjI0KYl9gWs) The video demonstrates that Pussy Riot's incarceration has done anything but silence them. Their commitment to freedom of expression, environmental protection and gay rights is stronger than ever and their status as global symbols of freedom and human rights continues to grow.

Original liner notes (December 23, 2013): Three members of Pussy Riot, Nadezhda Tolokonnikova, Maria Alyokhina and Yekaterina Samutsevich, were arrested following a performance at the Cathedral of Christ the Savior in Moscow on February 21, 2012. Pussy Riot performed "Punk Prayer: Mother of God Drive Putin Away," a song critical of church support for President Vladimir Putin, whom they regard as a dictator. They were convicted of "hooliganism motivated by religious hatred or hostility" and sentenced to two years in prison. The case drew international attention and many noteworthy public figures called for their release. In declaring Tolokonnikova, Alyokhina and Samutsevich prisoners of conscience, Amnesty International pointed out that Pussy Riot's protest had been peaceful, they cooperated with church officials when asked to leave, and they caused no damage. Though their protest may have been offensive, the right to freedom of expression applies in all cases.

In 1967 William Rees-Mogg wrote an editorial in the Times of London entitled "Who Breaks a Butterfly on a Wheel?" in which he argued that Mick Jagger's sentence of three months in jail for drug possession was not just. Rees-Mogg's point was that Jagger received this sentence because he represented a threat to society rather than on the merits of the case. Apprehensions about the influence of the Rolling Stones seem quaint now given how much more permissive Western society has become since the 1960s but rock & roll was dangerous then. The case of Pussy Riot, as much a confrontational performance art collective articulating their views through musical performances as they are a punk rock band, demonstrates that there are places in the world where rock & roll is still dangerous.

The question asked in the title of Rees-Mogg's editorial is actually more applicable to Pussy Riot's case than to Jagger's. "Who breaks a butterfly upon a wheel?" is a line from "Epistle to Dr. Arbuthnot," a poem written by Alexander Pope in 1735. The stanza containing that line is in response to a warning about those in power taking offense to satirical attacks. Beneath the colorful balaclavas, Pussy Riot presents a forceful feminist challenge to those at the highest levels of power in Russia, as well as to Russian society as a whole.

A few months after their convictions, Samutsevich's sentence was suspended on appeal, but the sentences of Tolokonnikova and Alyokhina were upheld. With less than six months left on her sentence Tolokonnikova disappeared for several days after going a hunger strike to protest prison conditions. Three weeks later her family was informed that she had been taken to a prison camp in Siberia. And then, in a strange twist, on December 19, 2013, a new amnesty law passed in Russia that applied to those "who haven't committed violent crimes, first-time offenders, minors and women with small children." Though the amnesty law included a number of activists, the wording of it indicates that it was directed primarily at the members of Pussy Riot. Tolokonnikova and Alyokhina, both young mothers of small children, were freed today, December 23, 2013, less than three months before their scheduled release from prison.

This compilation collects songs recorded by fellow musicians in support of Pussy Riot during their incarceration. These songs are cover versions of Pussy Riot songs, expressions of solidarity, and calls for their release. From prison Tolokonnikova wrote, "I am grateful to everyone who said, 'Free Pussy Riot!' We are all making history--an important political event--and Putin's system will find it harder and harder to control us." In granting pardons Putin expressed no remorse about Pussy Riot's treatment. His actions were not motivated by conscience, but rather by the politics of the moment. Russia will be hosting the 2014 Winter Olympics and such cases cast the country in a poor light. Pussy Riot may also have benefited from political intrigue and other high-profile pardons carried out at the same time, or perhaps the pardons were just an attempt to improve Putin's image. Still, had it not been for the public outcry of those concerned about the denial of their civil liberties, as well as a steady stream of statements of support from fellow musicians all over the world, the members of Pussy Riot might still be in prison. Even if Putin had no awakening in regard to the treatment of Nadezhda Tolokonnikova and Maria Alyokhina, the calls to "Free Pussy Riot" did not go unnoticed.

All of the songs on Who Breaks a Butterfly upon a Wheel? have been contributed by the artists under an Attribution-NonCommercial-
NoDerivs Creative Commons license
Liner notes by Todd Gardner
Cover by Asha

Turn Me On, Dead Man is a garage/psychedelic podcast on Mixcloud. The soundtrack of the psychedelic renaissance.